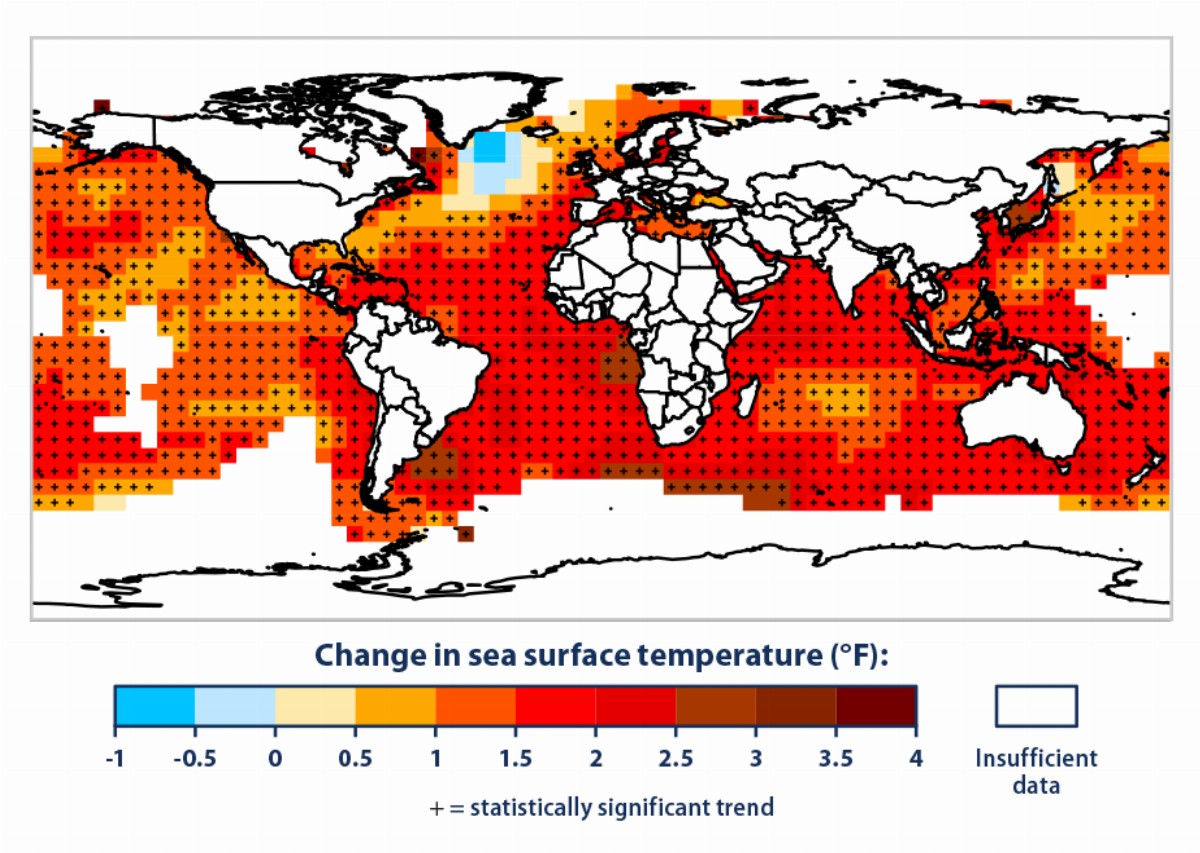 The Common Octopus May Stop Being Common Due to Climate Change

The Common Octopus, Octopus vulgaris, might not be so common if the temperature keeps rising. The Common Octopus is a common species of octopus, hence the name, found in the Atlantic Ocean near the coasts of most countries. (1) If you’ve ever had any octopus or octopus-flavored foods before you’ve likely eaten this animal. Part of the reason that they are so commonly eaten is because of how common of a species it is. They can grow up to 2 meters long with the arms being about 1 meter long. The mantel, the head of an octopus, holds all their major organs. (2) They also employ camouflage where they can change the color and texture of their skin at will to blend in with their environment. (3) Though currently they are common and plentiful, climate change is likely to bring about a big change to the distribution of this species, maybe to such an extreme that the name “common octopus” may become misleading.

The amount of Common Octopuses in the water changes with the climate, predominantly with the temperature of the ocean waters. There are several factors that influence population size of the common octopus, but studies have shown that water temperature is one of the most influential factors in population size. Cold water leads to a bigger population sizes whereas warm water leads to smaller population sizes. Simply put this means that the Common Octopus is more common in cool waters and less common in warm waters. This was shown by a research paper that compared the sea surface temperature and the catch sizes by fishermen. Through decades, the trends showed there were more octopuses caught when the temperatures were low. The yearly variability of the water temperature has been recorded for decades and shows that the temperature is rising steadily. The long term effects of climate change has lead to smaller and smaller populations. (4) If this trend continues, the diminishing populations may lead to the consideration of the common octopus as a nomination for an endangered species.

To understand why climate change will impact this species so greatly we need to discuss how temperature affects the species. The most important aspect to understand is that octopus eggs rely almost entirely on their ambient water temperature to control how and when to develop their organs and tissues. The Common Octopus lays their eggs in shallow water, where the ocean is the warmest, and this can lead to serious issues when considering the increasing water temperature as a result of climate change. (4) Octopus eggs depend on their ambient water temperature to control their growth, and they are pretty picky about it. Warm water makes the octopuses hatchlings ramp up growth and hurry up and hatch, going far enough as to neglect safety in extreme cases. With as little as a 3 degree Celsius increase in water temperature the mortality rate of octopuses can go up 30%. (5) That’s worrisome when considering the impact climate change is already having on our oceans and the continuing changes it will have over time.

Another aspect that ocean water temperature regulates is energy expenditure. (6) The warmer water makes the octopuses spend more energy to maintain its biological and physiological balance; this means the octopuses need to eat more, which requires more energy to be spent hunting. This creates a cycle that could lead to energy deficits because of the limited resources octopuses have access to. When octopuses eat food, their metabolic rate increases to facilitate the processes required to consume and digest the food; this is a phenomenon called Specific Dynamic Action (SDA). Although the costs of feeding are similar at different temperatures, their oxygen consumption rate is higher at colder temperatures than at higher temperatures. SDA requires less energy overall at lower temperatures than at higher temperatures which means as ocean temperatures rise, their energy expenditure for SDA increases. (7) Octopuses need more food to provide the energy lost in primary functions when dealing with high temperatures, which could negatively affect their growth rates and other functions.

These octopuses have inversely linked protein and energy usage. This means the more energy they use, the less proteins they produce. (6) Protein production is important for their growth as more protein tends to mean bigger bodies. As the water in the ocean continues to rise in temperature, the average size of an octopus will continue to decrease due to reduced protein production. It is known that the smaller the octopus, the less successful they are at hunting and therefore it’s more energy expended on failed huntings. (7) The warming waters changes in the way octopuses use their resources and creates a positive feedback loop. (6)

These common octopuses are a part of an ecosystem that contribute to both their environment and our human needs. With higher temperatures due to climate change, octopuses are changing the way they behave and develop in ways that often times hinder their survival. Birth rates, population size, and energy distribution are all affected drastically with slight changes in temperatures. (4-7) Climate change is reshaping the ecosystem of these invertebrates, which is leading to reducing their population numbers. If climate change continues on the path and rate that it is going, many species we identify as common may find themselves heading down the same path as the common octopus. If you enjoy eating octopus, know that it may become a rare delicacy should they be considered an endangered species, as using them for food would most likely be banned for conservation purposes. What we can do to help them and many other species is by reducing our carbon footprints. Using less fossil fuels, recycling, and investing in renewable energy sources are all helpful for the environment. Also consider getting in touch with local conservation centers and seeing if there are volunteer opportunities. Individually we can make little changes to help and as long as we do our part, the Common Octopus will still be around to be a tasty treat.