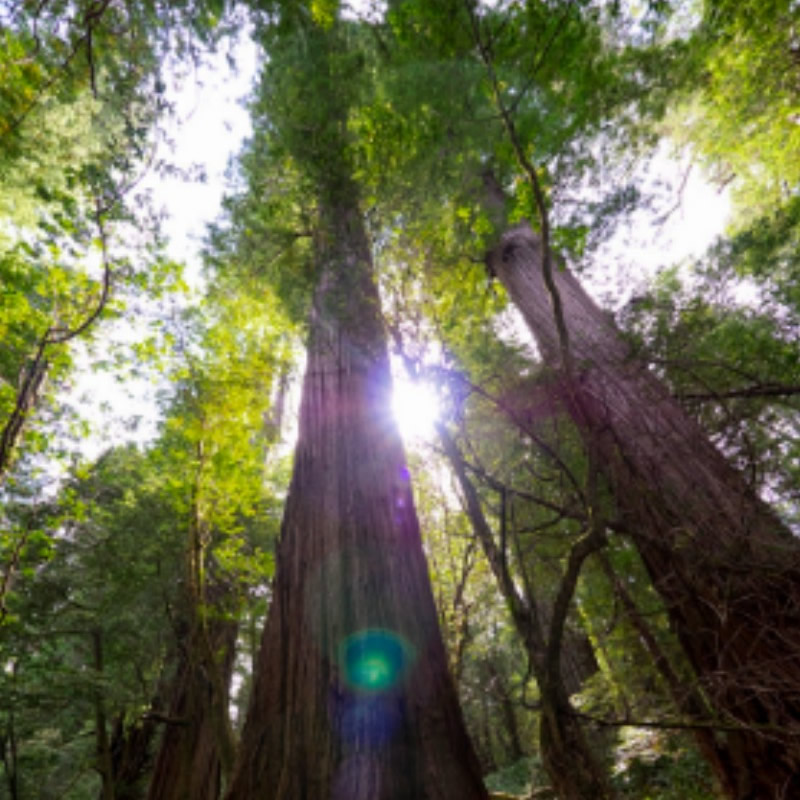 When people say there is no place in the world like California, they do not exaggerate. Golden oak chaparral runs into craggy and desolate desert; sagebrush meadows in the foothills reach toward frosty, coniferous alpine; the mountains plunge into the ocean and below the surface, an entire other world blooms. Perhaps the most sublime of these diverse ecosystems is the coastal rainforest, a twenty million year old relic of the Jurassic era that depends on the precise precipitation and temperature of the Pacific Northwest (PNW) coast region to thrive. Giants rule the land there: the presence of Sequoia sempervirens, the coastal redwood, dictates the condition of all its fellow cohabitants. Sequoia are among the tallest trees in the world, with some reaching over 350 feet, but yet they subsist only on the occasional rain and the delicate blanket of fog that the PNW is tucked into most evenings.

As a keystone species, or an essential species within its ecology, the Sequoia is a load bearing element in its environment. The canopy they form above the rest of the plants in the understory gathers moisture which drips down from above and into the ground for either the redwoods’ or another lesser plant being’s benefit. Without this vital role of Sequoia sempervirens, the plants below would starve in the foggy winter months. However, our steadily warming world is putting that ritual at risk. As weather events in the PNW become more extreme, instances of coastal fog will decline — and not only will the redwoods suffer, but so will the entire ancient ecosystem.

Coastal redwoods are only found where there is fog: and there’s a reason for that. Like all plants, coastal redwoods need water, and they need a lot of it. It can take months for a single water molecule to travel from the roots of a redwood to the top of its canopy. Redwoods suck up water slowly and steadily, gallon by gallon. But the higher the redwood, the harder it is to get the water hundreds of feet in the air. This is why redwoods have evolved foliar uptake, or the process of drawing in water from the air via stomata in their needles. Coastal redwoods need the California fog to meet their water needs, especially during otherwise dry summers.

Coastal redwoods aren’t the only species that benefits from fog. When the dense blanket of fog engulfs the forest, redwood trees capture a lot of the water for their own foliar uptake. Any excess water that isn’t taken in runs off their needles and drips onto the understory plants sitting on the forest floor below. Those understory plants don’t necessarily use foliar uptake to take in water, but the small stream of water from the coastal redwoods saturates the ground and provides much needed water during summer.

California has a Mediterranian climate, meaning it has mild but wet winters and hot dry summers. The rain during the winter hydrates the coastal redwoods, but the trees are entirely dependent on the fog during the summertime. Studies have shown that fog frequency during the summer has been in decline. This puts the coastal redwoods at great risk of losing what’s left of their habitable zones. Coastal redwoods are now found only along the coast of California and southern Oregon, and with the threat of climate change looming over fog decline, these redwoods are in danger.

Let's face it — our world is on fire. With increasing carbon dioxide emissions, more gasses are being trapped inside the atmosphere and increasing ocean temperature. This change has led to a shift in wind direction and air pressure. Originally, summer fog was a constant in California because of a high-low pressure gradient known as the North Pacific High. This fog would be absorbed by the coastal and forest foliage. The current warming climate changed Pacific High so there is increased pressure over inland areas, reducing the transport fog that many species rely on. With less summer fog, trees are dehydrated and have a lower survival rate, which has a significant affect the environment around it.

Sequoia survival is essential to the functionality of the Pacific Northwest. Herbivores will use the trees for protection and food, while carnivores feed on these animals. With more sequoias dying due to dehydration, less herbivores are able to feed and seek shelter, which in turn leaves less prey for the carnivores. In this way, reduced coastal fog has a drastic negative impact on the entire coastal ecosystem.

Coast Redwoods and fog are intimately connected in a relationship that goes back millenia. Although fog is not precipitation, the redwoods leaves collect the moisture from the air, absorbing it and distributing it to other understory plants when the condensed water drips from

the leaves. Todays reality of a changing climate puts Coastal Redwoods and the ecosystem they support in jeopardy.

Changes in the coastal climate, due to rising ocean temperatures and shifting winds, will restrict the redwoods’ already small range. In the last 50 years the fog events experienced by redwood forests has been becoming less frequent and thinner, exposing redwoods to greater dehydration during dry, summer months. As a result, historic ranges are being shifted north and restricted closer to the coast. As this keystone species range shifts, so do the plants and animals that rely on them.

These gentle giants have greater impacts than just those of its ecosystem. People from all over the world come to be dwarfed by our enormous redwood trees along the Pacific Coast. This popularity has led to great research and activism directed towards understanding these trees and how we can conserve their beauty. To see how you can keep our Coast Redwoods nourished and hydrated, visit: https://www.savetheredwoods.org/. Small, united efforts can create awareness and protection for these giant, majestic trees.

"fog rolling in" by kara brugman is licensed under CC BY-NC-ND 2.0