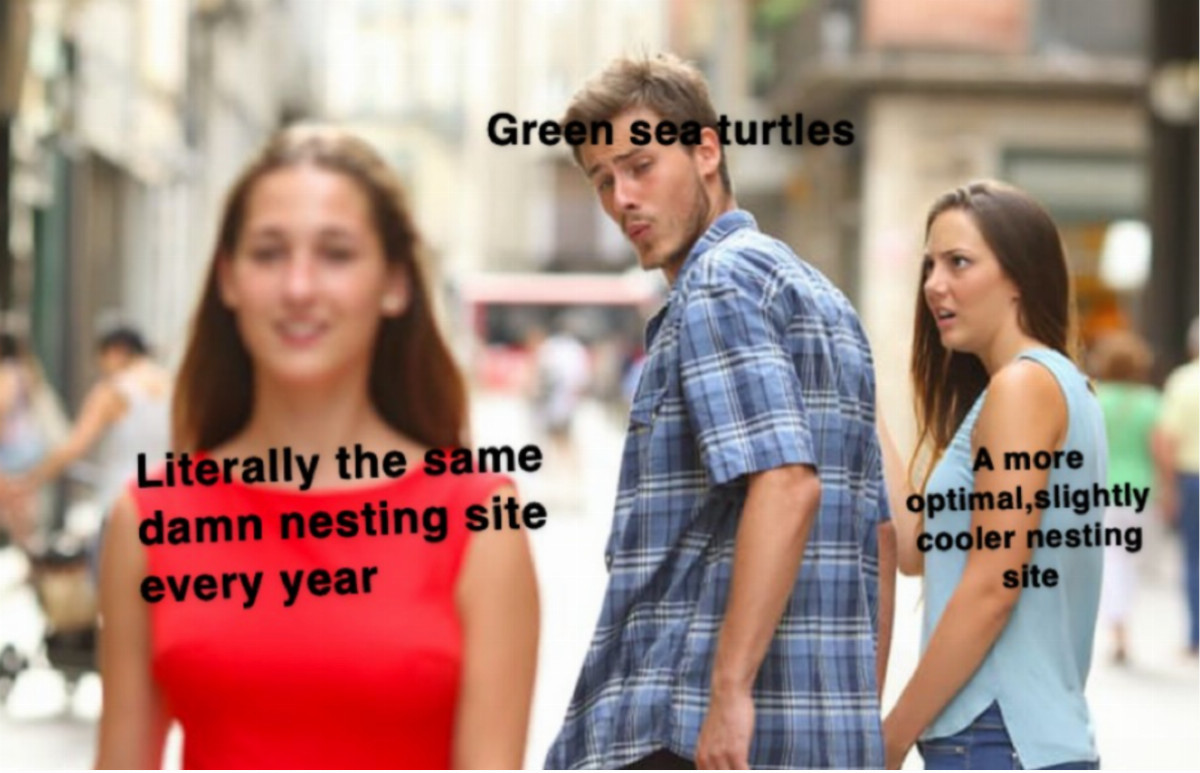 Sea Turtles are often associated with good luck and endurance; these are some of the same attributes they will need in these coming years. Since the 20th century, global and sea temperatures have been on the rise due to climate change, with an expectation to increase by 5 degrees celsius by 2100 (5). Chelonia Mydas, otherwise known as the green sea turtle, are expected to take a major hit to their population as a result of these rising temperatures. Hatchlings, or baby sea turtles, sex is determined by nest temperature. A warmer nest temperature means more females and cooler temperature means more males (2). As this warming continues, there is a good chance that 100% of future hatchlings born will be females (4). You might be thinking, how is this a bad thing? That’s a great question. Sure, a sudden boost in females has the potential to bump population numbers, but this would only be temporary. In reality, they would still be reliant on male sea turtle availability (3). Without enough male sea turtles, there is a high risk of population loss faced by these ancient creatures. However, there is light at the end of the tunnel. In combination with lowering CO2 emissions, green sea turtles can make major evolutionary adaptations to come back from this setback.

As of now, there doesn’t seem to be any sign of climate change slowing down. Right now, a lot rests in the flippers of green sea turtles. A possible solution comes from these evolutionary adaptations. Studies have shown that sea turtles have a genetic basis for selecting microhabitat nesting characteristics (3). Micro-what? Trust me, I’m thinking the same thing. Microhabitat nesting characteristics refer to characteristics sea turtles look for when preparing to lay their eggs. Some characteristics include nest shade, nest depth, or nesting beach (1). More on these nest characteristics can be found here. There’s no “right” nest per se, sea turtles just dig what feels right. Their nesting behavior really depends on their location and the species type (6). However, by adapting some of these nesting behaviors, there is a better chance that their nests can become cooler and lower the amount of female hatchlings (1).

Looking deeper into the ways they can alter their nesting behaviors, we will first turn our attention to nest depth. By making their nests deeper than the typical 30-90 cm, the nests have less of a temperature fluctuation and are overall likely to become cooler(1). The same outcome will occur through adjusting nest shade. Shading the nest in areas of vegetation, such as near bushes or under trees, will help make the nest on average 1 degree celsius cooler (1). In fact, it was found that nests made in the open sand were found to produce a larger number of females compared to nests made in more forested areas(3). To learn more about the benefits of vegetation for nesting sites, you can visit here. Nesting beaches are a little bit more difficult to work around. After hatching, green sea turtles spend their juvenile years living in the open ocean, and once they become adults they will migrate from coastal areas where they forage to the beach they originally hatched in order to reproduce. It is an innate ability, something they are born with, to return to the beach where they are born to lay their eggs. Future generations are dependent on this generation to nest on beaches where they are not at risk of overheating or land erosion (6).

So changing their nest is all they need to do? That’s definitely one of the ways they can deal with their dilemma. Another way is through thermal tolerance. Thermal tolerance is essentially how much heat that can be endured by the green sea turtles; it varies among sea turtle species and also has a genetic basis (4). If green sea turtles are able to adjust their body temperatures and adapt to local thermal conditions, they are likely to pass this adaptation onto further generations. This idea suggests that if hatchlings are born at high nest temperatures, they can transfer this tolerance onto the next generation, increasing their overall fitness and increasing their chances of survival (3).

The overall consensus seen in studies is that by altering nesting characteristics and adapting thermal tolerance, there is a high chance that green sea turtles can limit the number of female hatchlings produced in the face of climate change. There you go, problem solved! Easy peasy right? Well, yes and no. Green sea turtles are found all over the world in the temperate and subtropical waters of the Atlantic, Pacific, and Indian Ocean and the Mediterranean Sea. Hypothetically speaking, they have a choice of any beach in the world to choose from to make their nests, but it’s not that easy. They live quite a long time, with a lifespan of about 70 years or more. However, they don’t reach sexual maturity until they are about 25-30 years old. With the implications of climate change creeping upon us, it is important that these adaptations are made sooner rather than later.

Where do we go from here? There is still a lot we need to figure out before we can make any final conclusions. For starters, temperature has been found to be the main driving force behind sex determination in sea turtles, however studies have present other potential influential factors like nest moisture (4). Additionally, there is much to be learned about male sea turtle breeding behaviors, which would be helpful in having a better understanding if current populations can possibly be stabilized through these climate changes (2). Other areas that are lacking include inbreeding or small green sea turtle populations that could lower genetic variation or evolutionary adaptations in the species (1). We also don’t really know how green sea turtles will react to other effects that come with climate change such as rain storms, changing currents, rising sea levels, and ocean acidification. With so much unknown, it is far too early to assume the worst.

The biggest thing we can do to help these shelltastic beauties is to do our part in lowering CO2 emissions. This sounds like a big task, I know, but really the best and easiest way to be involved is to stay informed. You can visit here to find easy ways to reduce your carbon output. To learn more about current and future climate change trends go here. If you’d like to learn more about our green buddies you can visit here. These resilient creatures have endured so much already, they surely have luck on their side.

Meme made by Rachael Alcala